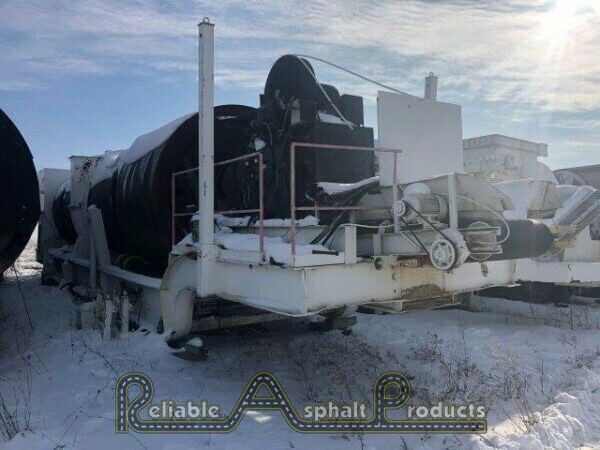 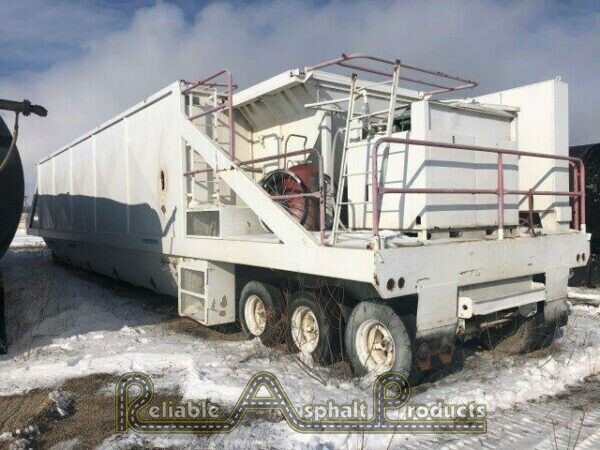 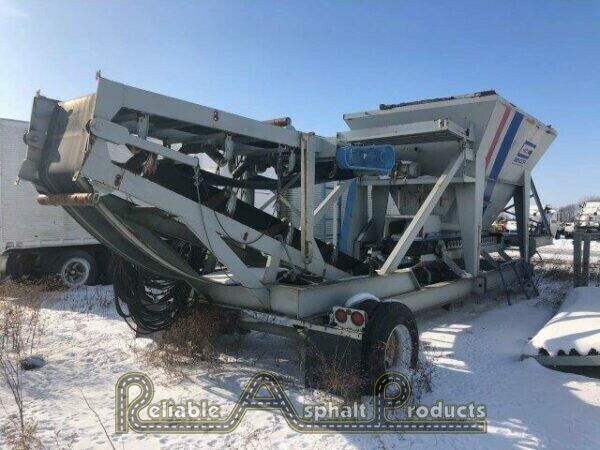 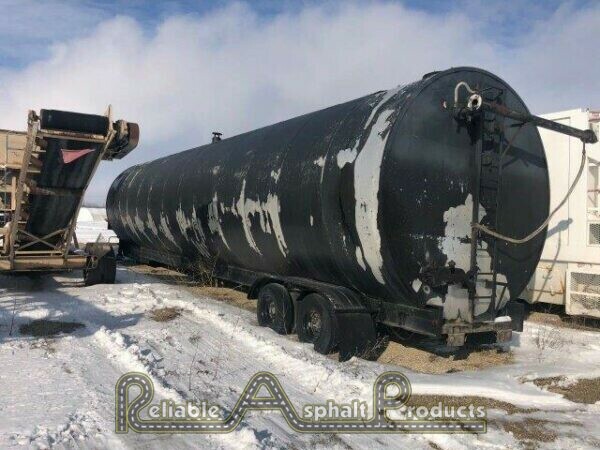 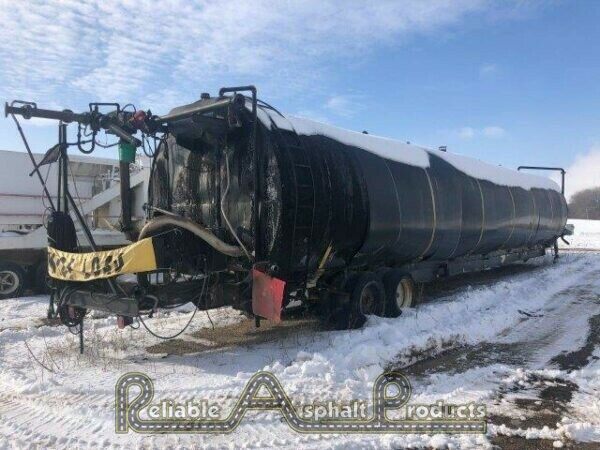 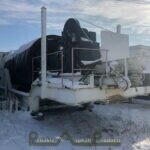 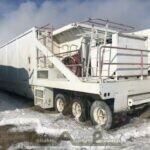 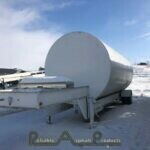 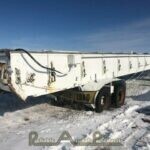 Overall, the plant shows well. The entire plant is complete and not missing any major components. Less a couple missing motors, everything appears to be intact and in working condition. It is unknown at this time when the last time the plant ran was, but we believe that was no more than a couple years. During the inspection, there were a few items that were inaccessible due to weather restrictions. The drum shell still appears to be in good shape which leads one to believe the current shell is a replacement shell. There are tags on most pieces of equipment stating what the pieces were from the factory. Most have been painted over but one can still see the imprint and make out what is on the tags. I would guess this plant is around a 1990 model.

The cold feed set was originally a 3-bin portable set. At some point, a 4th bin was added to the chassy, the add-on bin is noticeable by the tube steel frame and different style throat. All the bins appear to be in serviceable shape. The bin openings are 9’ x 14’. They all have what appears to be bolt-in steel liners. There was no major deterioration at the throats of the bins. A few of the bins appear to possibly have some residual material in them. The motors appear to be DC. The tags have been painted over and you can’t see what the hp is. If they are DC we suspect them to be 3hp and if they are AC we suspect them, to be 5HP. The feeders are 24” x 8’ long. All the feeders appear to be in decent shape. The collecting conveyor is 29” (nominal 30” and has an estimated length of 50’ under the bins with an approximate 20’ fold up extension. There is a tandem axle for transportation and a built in bulk wall on the loading side.

There is a single axle portable fuel tank with approximate dimensions of 10’6” x 20’. The tank looks serviceable and no major deteriorations or blemishes are evident.

There are matching 30” x 55’ Portable Truss style conveyors for both the Rap and Virgin bins. Both are equipped with a weighbridge and windguard. the belt shows some normal wear but may need to be replaced prior to the next installation. Overall, both conveyors are in good shape and appear two need very little additional repair. The weigh bridge loadcells may need to be replaced for the next installation.

The Gencor /Bituma portable rap bin has a 9’6” by 14’ 6” opening. The feeder is 36” wide and approximately 15’ long . The feeder is missing a motor. There is a grizzly on top of the bin and Bolt in steel liners are installed as well. The collecting conveyor is 30”x30’. The unit has a single axle. The exterior of the bin shows wear but the inside still looks good with the liners. There is A tag on the unit but it has been painted over.

The exterior of this tank is in fair condition. This is the better looking of the 2 AC Tanks. The burner is reported to be in working condition. There is a tandem axle on the unit.

The Gencor/Bituma baghouse is rated at 70,000 CFM. There is a tag on the unit but it has been painted over as well. You can still see what it says about the baghouse rating and model number. There is a tridem axle on the unit. The bag house is equipped with a drag slat bottom. The chain appears to be in serviceable shape with life remaining on the chain. The fan on the bag house is a size 54. There is an air compressor mounted on the rear of the unit that has approximately 1800 hours. The air compressor looks to be in need of some service and or replacement. There is a hole near the inlet part of the baghouse. I’m not sure if this was caused by an exterior breach or an interior wear spot. I was not able to open the top of the baghouse due to ice and snow conditions. The bags have a normal amount of cake on the bottoms that were visible. Overall the house looks to be in decent/serviceable shape with the exception of the odd hole.

At first glance the drum appears to be in good shape. The burner if a Gencor UFII 135mbtu burner – believed to be burning waste oil. The exterior of the shell looks good and there. The shell is a nominal 8’4” x 44’ Long. There is an 8’ expanded end section on the inlet end. The tag says the drum mixer is rated at 400 TPH. This tag is also painted over but you can clearly read what it says. All but the downhill discharge side trunnion appear to be in good shape. This trunnion is showing a small amount of cupping and appears to have recently had the downhill bearing replaced. There are 2-75hp motors powering the trunnion drive system. The tires look in good shape with little rollover on the edges. The rigging also looks good. Overall, the interior flighting is also in good shape. Most of the flights in the drum appear to have life left on them. There is a 30” slinger feeder installed on the inlet of the drum. The thickness readings on the drum are as follows:

The exterior of this tank is in poor condition. The skin is being held on and together with ratchet straps. The tank is reported to be operational. There is a tandem axle on this unit.

The control is a very basic operator station. There are Systems ADP100 Controls installed. The Motor Control Center is in the back of the house. There is a plug bank for the cables on the exterior side of the trailer. Overall the control house appears to be complete and in working order.

Overall the trailers themselves appear to be in serviceable shape. There are 3 CAT generators housed in 2 trailers. I have requested specific info related to these units and the current owners are going to give us the pertinent info – hours, model #, etc…

There is another portable Gencor 10×15 rap bin. This unit has a 36” x 15’ feeder and 15hp Motor. This is very similar to the other rap bin but a newer vintage. The bin looks to be in good condition.

The Silo is older than the rest of the plant. The unit looks like an older Standard Havens but may be a portable Bituma Construction Equipment Make. There is a weigh batcher fixed to the bottom of the scale. A tandem axle is equipped. I was not able to see much of the interior of the silo – further inspection will be needed to determine condition of the cone. I have requested history of when the silo last had liners. The length of the barrel section is 16’ and I would estimate this at a 60-80 ton capacity.

The is nominal 38” x 70’. I initially thought this was a Standard Havens, but the slats are almost 39” long and there is a 2 piece cast floor. That made me think this may have been an early Dillman build. The chain and slats are in decent shape. There is not a lot of hour glassing on the chain and the chain appears to fill the sprocket recesses completely. The unit has double chain. There is a walkway on one side.

There is a portable crane erect dust silo. The barrel is 25’ long and it appears to be roughly 400-500BBL. Overall the unit looks complete with all accessories necessary for operation. The airlock looks to have been replaced recently.

There is a Burke 1000 Gallon Portable Calibration tank

There is a Deister 4×8 Single Deck rap screen and a Kolberg 5×10 Single Deck Virgin Screen. Both are in serviceable shape and complete. You've just added this product to the cart:
Stop Vid

Inquire about this piece of equipment